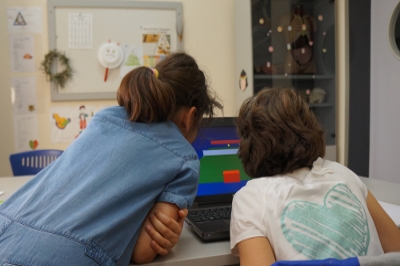 When we reached the team of children who were about to test the tennis game, the 2nd of the games  for blind children we create, the friend who guided us there started explaining:

- Well lads, the team over here is from SciFY. They make PC games for blind people. They have made...

I instantly recognized her. It was Athina1, a sharp-witted little one who had tested Tic-Tac-Toe, our first game and was excited about it. But still, I didn’t see this one coming: She was jumping up and down. Her joy was so overwhelming that I wanted to jump up and down myself as well. I held myself.

- Hey Athina, we had promised you we‘d make a second game as well, hadn’t we? Well, here it is, tennis! We want your opinion about it.

After we explained who we are and what we do, we asked who would like to try first. Well, ok, who would dare take Athina’s turn? Not even for a joke.

In a while came Alexandra.

- Hallo Alexandra. Do you see anything or you have complete blindness? Nikos asks her.

- But what do you think? Of course I can see! I see my blindness and some black around it (laughs). Black humour.

We have to get used to such humor. These children are incredible! They can break the ice right away.

- So what do you think? Shall we play?

She tried it. She was anxious at the beginning because she hadn’t used a computer for a long time. But soon enough her eyes were sparkling. She was enjoying the game for good. She takes off the headphones.

- It’s very good! Reminds me of goalball! Leave it here with me for a couple of days and I ‘ll play the heck out of it!

Goalball? It sounds familiar. Like some kind of football for blind people if my memory is correct. But I have a weak memory..

- “Yes, right!” she verifies. “I play a lot of years goalball. You must have a well exercized hearing to know where the ball is coming from. Right or left;”

She is bursting with energy. She plays some more, we make the evaluation and afterwards comes the good question:

- Eh, well the athlete in you never sleeps huh? Well, in this game you don’t have to attack. If you successfully repel the ball enough times, you change level.

- What are you talking about? I want to attack it, to give it some hard time!

We discussed how complicated would have to be the sounds in such a case, how much harder the game would become, if it could be played by everyone or only the ones who had an exceptional hearing…

Others joined the conversation as well.

The thirst to play games is incredible. “I want to attack as well.” “But only defending?” “Will you make a football game too?”

I take notes and smile.

Because I know that when I get back in SciFY’s offices, we will continue with even higher spirit what we are already developing: our next moves in creating even more games for blind children, beyond the needs of the project.

Because the thirst, the need in all of us to play is great. In everyone. Not just in a few.

And if we, the “seeing ones” ignore it, in reality we ‘ll be only seeing our blindness.

1Some facts of the story, like the names of the children have been changed for reasons of anonymity of the kids.