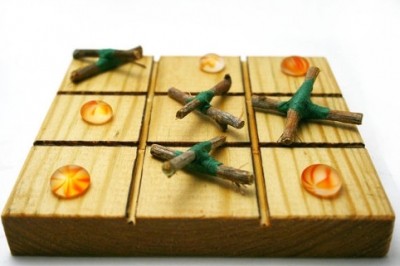 That Thursday was one of those days that get started on the wrong foot. We were looking forward to it, but all the signs were leading up to a day of defeat. We had worked so hard, we couldn’t wait to show the kids a first draft of the game, to listen to what they thought and now Murphy’s Law, relentless, was upon us. Thankfully, we were once again pleasantly surprised.

But let’s get back to where we were.

We already knew the blind kids’ need for playing; that experience had shaken us. So we heartily started creating that first game: a tic-tac-toe based on sound, designed especially for them – with a 3-D sound, exploiting their knowledge and preferences. A beautiful challenge!

January 2015: Thursday morning
The day of the first testing was close, but the first draft of the game we’d show wasn’t ready. Many winter colds messed up our planning. Nikos – in charge of the programming – had worked day and night to make it in time, but some mistakes showed up at the last minute…you know how these things go. And in such cases even a small mistake can ruin everything. But the date was set and there were kids waiting for us.

We were really torn. On the one hand time was pressuring us and on the other hand we didn’t want to go unprepared. I was ready to say “let’s call it a day”, but something held me back. Nikos, perhaps, who said “let’s try with what we’ve got”. And thankfully we did.

We arrived at the Special Primary School for the Blind at noon. The director and the teachers were perfect: always by the kids’ side and valuable help to us. In the classroom there were two girls from sixth grade waiting for us eagerly. Katerina was one of them, the girl who played games on her tablet without seeing, just so that she could interact with it. “Let’s see”, I thought.
“Katerina, you’ve played tic-tac-toe before, right? For the first time on that wooden one I brought last time, remember?”
“I’ve played many times since.”
“How? Did you buy one?”
“No, I made one myself.”
“Err…How?” That girl was set to make my life amazing.
“With the Braille printer. I used it to make one with lines.”
“And what about the playing pieces? The Xs and the Os?”
“I made them myself, with clay.” Well, if you’ve got it in you…
“You’re incredible! Well done!”
“So, guys, we’ve had some problems with the game. It’s not ready yet, it has flaws. Do you want to try now or play next time when it will be fixed?”
Yeah, I know, the way I put it was challenging.
“Now, now!”
“All right… Well, there are no Xs and Os on the computer, you’ll only hear sounds. We’ll play with the headphones. What do you think?”
(Note: Katerina had never used headphones before. Elpida had never used a computer before.)
“Me first!”
“Me first!”

We flipped for it and Katerina went first.
It was a disaster. Two or three little mistakes ruined everything. The programme froze 8 times. Sometimes the sounds weren’t working and Katerina was confused. Same thing happened with Elpida, who had never laid hands on a keyboard before.

But they both wanted to keep playing. We would have stopped playing in like two minutes, but the girls were playing again and again. They were confused, but they kept going. Smiling. Excited.
“We’re really sorry, guys.” We were mumbling. We were writing down reactions, corrections, improvements. The bell rang. They had to go to the dining room.
Now how could we ask them what they thought? “I’ll ask now, so that I’ll know how much better it does next time.” I thought.
“So, on a scale from 1 to 10, how much would you give the game?”
(We’d give it a 0)
“8!”
“10!”
They ran off to the dining room.
And we stayed there looking at each other speechless.
All this thirst for playing! They gave a 10 to what we would have stopped playing in two minutes.

We’re leaving hurried, excited. Our eyes are sparkling.
We have to make this game the best possible. We owe it to them!

This project is funded by the Greek NGO Programme “We are all Citizens” which is part of the EEA & Norway Grants for Greece. The Bodossaki Foundation is the Fund Operator of this Programme. The Programme aims to strengthen civil society and enhance the contribution of NGOs to social justice, democracy and sustainable development.